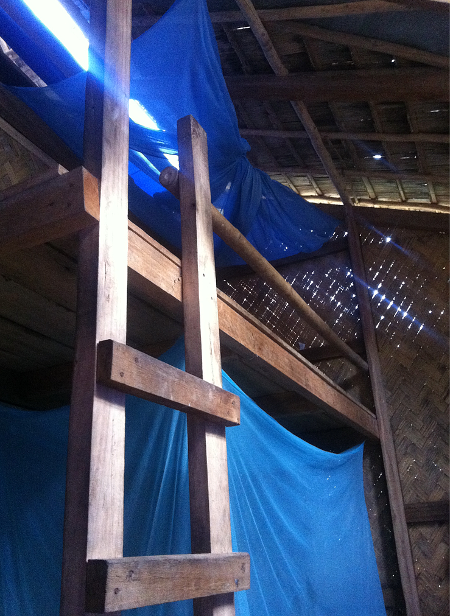 It’s at the “Spicy Lao” Backpackers Inn
A place that doesn’t care if the guests are rowdy, if they do drugs,
or have sex right next to the other guests.
Or as what I felt being the activity that pissed me enough to
get out of there:
The guy next to my ….hmmm bed?
Stood up and peed straight down on to the floor and right on to
other people’s beds and belongings in the middle of the night.
As if that wasn’t enough he bent over, balancing high up there
grabbing my back pack. My back pack wasn’t more than 4-5 inches
away from my head, and all of me and my back pack was also under
same the mosquito net as I was sleeping.
Being robbed by a guy I had dinner with earlier felt really bad,
so I asked him; what the EFF are you doing?
He replied, oh I’m sorry.. didn’t know you were awake.
Eh what the hell??
Even if I for a brief ephemeral moment felt like giving the drunk scumbag
a small kick to lose his balance, I’m not as low as him and
I wouldn’t want to hurt him all that much…. Right? …
With a headache already going strong, this peeing and robbing,
and the fact that I was already awake when he was peeing,
because people next to me enjoyed sexual pleasures ….
right there in the open…noise and all…
These things combined was enough  … I just had it!
In the morning I went out looking for another place….
I’m OUTTA HERE…
My friend was out of the picture because she had gone
tubing down the river, and she seemed oblivious to all this …
I felt so bad for the guy running this place, because I really
don’t think he knows, or can grasp what is happening in there …
Well he could check in … which he obviously did not…
The armed security guard in full uniform he had placed by
the entrance at night didn’t help keeping guests who were
already in from behaving as animals…
The women around cleans and works hard, to keep up with their
guests level of messing it up… pee and vomit and what not… Yuck!
So…..
When a bunch of Swedish backpackers walked in on the premises ….
I felt I should tell them!
A few of them stayed behind while the others ventured out to see
if there were room enough for them elsewhere in town.
They were actually 9 of them, and they weren’t backpackers,
but Med school students who had been visiting hospitals in Vietnam,
and Laos, and now had a few days off on their own before heading
back to the university in Sweden.
We started talking and of course they asked about my pink hair
and my dress…
I told them about the “Pink Spider” about hide, the music and magic….
We ended up all looking for a better place to stay…