Last entry ended with these words:

“And I believed him…
in a way I still do.
The bridge however… is another story.”

Right now I am going back in this very blog..
way back to 2011 when I first started blogging on Tumblr.
Once I started The Pink Spider Web I imported all the old
blog posts a total of 350 some pages, each containing 3-4 posts.
The migration didn’t go without technical issues though!
All titles got fucked up,
links broke, video plug-ins didn’t work and
all images got weirdly resized.
When I first started The Pink Spider Web, keeping up the
momentum was number one priority, so the old blog entries
got edited and fixed some 10 pages or so back in time…
the rest went on the back-burner.
That meant blogs about Seremedy in Japan,
Inazuma Rock Fes, concerts with TMR, MUCC, L’Arc~En~Ciel,
and many many more
… just had to wait for the day to come
and the need for it all to resurface.

It was OK, I had to focus on what I was wanting to achieve,
and the old blog wasn’t really aiding that
process.
Well now, when I’m in the process of writing this book,
all these hundreds and hundreds of posts,
the photos and videos are incredibly valuable.

When I now again read about my
dreams, hopes,
ideas, passion, motivation … the drive
that I had then 6 years ago,
it was very much the same as it is today:
Same dreams, hopes, aspirations, and motivation.
I want to build bridges.
Close gaps.
Help people reach outside their comfort zone.
Turn on passionate fires.
Increase Peace
Make people see their own values in all of this.
Help musicians understand and learn how to connect
with audiences they aren’t familiar with, or are even
physically far away from.
That HAS BEEN and still IS my ultimate goal!
I want people to learn from each other and
change in a good way. including myself!
Change their ways, become more open-minded to
‘the other’…
I wish to…
build bridges and show people how the can meet
at the middle of the bridge! 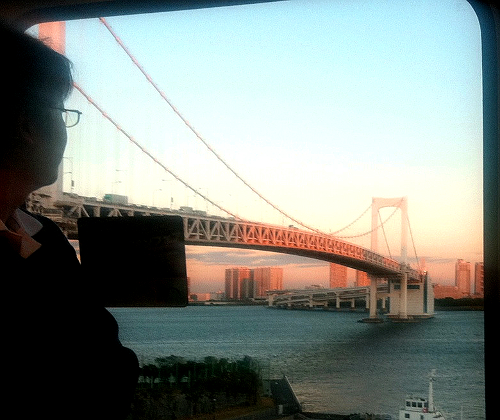 The bridge metaphor works well because it connects
two landmasses, two entities, and it is something tangible.
A bridge something we can step onto,  and walk or travel over,
from one side to the other.

When I first met Reds in April 2013, we instantly connected.
It was at a Live gig with Blade™ at Club Sensation.
The fact that we ended up meeting was quite amazing in
itself, but the blog is not the place to explain all that in detail.
I will go into more detail about that in the book.

I could feel his eagerness to wanting to reach out.
I had learned already prior to meeting him, that connecting
with Japanese people aren’t that easy in general,
and connecting with musicians maybe in particular.
Often the musicians in Japan don’t speak English,
which for our collaboration purpose at this level is
less of a problem. 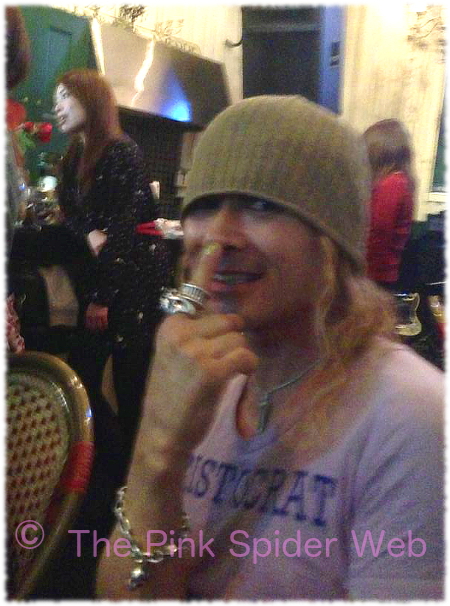 What is an issue however, is that they live on their end
of a bridge.
They are used to certain ways of doing things.
They have their ways of promoting themselves.
Their ways of reaching their fans.
Their already loyal fans, I might add, whom they wish to keep
and not scare by suddenly leaving them hanging.
Also most, like Reds, aren’t even aware of this.
Culture differences are more seen as peculiar ways.
Like we Westerners, we hug each other in public,
and we hug our friends.
The deeper differences cannot be seen, and are way
trickier to become aware of.
Because no one, is aware of them when we are around
people that are similar to us.
And keep in mind, Japan is a very homogenous society.
A society which also strives to stay homogenous.
We, as in mankind, cannot see how we communicate
within our own group,
how we socialize and hang out with each other,
as anything but .. well it’s the normal way!
that’s the way people are…
Not until we really start to get to know someone different,
from a different place, and meet with them a lot of over a
longer period of time.
So if you have few foreigners coming, and you cannot really
talk to the ones that do because you don’t speak English,
and you maintain an idea that the foreign is a bit scary,
then this bridge is seldom walked.

When I entered the music scene  in Japan, and I started
meeting with bands like:
Vagu*Project, DAZZLE! and Vorchaos to name few.
I almost immediately became aware of this.
Not soon enough maybe…. LOL
I presented for Vagu*Project some brilliant ideas,
only to later learn, that in their minds all this was good and
all, but really also very, very strange.
I had walked over the bridge and presented for them how
it looks on the other side of the bridge.
They liked it, sure they did, but added:
That only works on the other side of the bridge,
not here.
And Anna-san by the way…
What is Facebook?
We have ameblo アメブロ. (This was in 2011-2012)

I explained all this for Reds, I told him what I had learned,
and he said…Nah, I want this, my band (AURA)
and I need this:
I want to reach many people with my music.
This is wonderful and a great start!

Where I think I failed early on was to explain, truly convey,
is that this requires you to change.
This failure however, went on under the surface….
the whole time… and still is there ..unfortunately!
What I failed to make him understand is:
YOU must walk on that bridge and adopt to other ways,
at least 50%… HALF WAY.
You must do a lot of the work, and the change.
I haven’t been able to make this happen!
Also you have to change and you must be brave,
and go against what people around you want you to do!
Being brave… hmm that is very difficult for anyone to be,
also for Reds.
For any artist, also for Reds, being liked, is so so important.
Being liked by others kind of clashes with the idea of
being brave, and doing things against those around you,
or as in Japan in particular, above you!

Thing is Japan … well..Japan is very demanding society
also for the Japanese themselves.
They are proud of their harmony,
proud of their low crime rates,
proud of having a stable society.
Which is great!
Great …but not yielding change.
You can’t go against the people above you!
You can never stir anything similar to conflict,
never oppose, instead instill group harmony.
So that doesn’t help any kind of change.

Neither negative change,
nor positive…
In a way it kind of muffles and even hinders creativity at times.
Not that Japanese might agree with me here,
but that’s OK. Because if everyone around you
.. on the same side of the bridge as you are…
agrees with you, and knows this to be true,
then it is.

This is of course true on both sides of the bridge!
I just happen to be writing about my experiences in Japan.
I need to adjust and take in to account the social rules
in Japan, and listen to how they do things and what they
desire and wish.
Also one cannot behave in a Western way and assume
people will listen to you or even like your
ideas. Often though they really do listen!
They just won’t act upon it.

This is why I was delighted to meet Reds though,
because he intuitively felt like it fit in with his own
ideas about the future, AND maybe more importantly
he smiled and was very positive.
We did have some problems communicating this evening,
because Reds did not speak any English,
and I still did not speak Japanese.

How did we communicate?
Very creative way actually…
and I will tell you in the next blog!