First an important note about “the Pink Spider Web”….

Many of you have commented and asked about the  fact that when clicking on other menues on this site you get a log in window.
It asks you to please enter a membership ID and Password.
There is in fact NO need to register for a membership.
There is not even such a thing as membership at the moment.
This is just a way for us to technically keep the rest of the site “locked down”
while it’s being developed!!
So for now ENJOY the blog, don’t worry about membership,
and I will tell you all when the rest of this portal will open!
(It’s huge project so please be patient)

The Pink Spider Web site, or portal rather, is intended to become a meeting place, for all who have interest in the Japanese Rock Music Scene, but who aren’t necessarily living in Japan.
(but of course we also welcome all of our visitors living in Japan!!
Finding information about Japanese bands, can be troublesome if you don’t read Japanese fluently.
This is also why “the Pink Spider Web” has been collaborating with individual bands such as Vagu*Project, to create web sites accessible and understandable for people who don’t speak/read Japanese, and who want to download and buy their music from outside of Japan.
Currently many bands, like Vagu*Project, only sell their albums as CDs at Live Houses, and a few sell them also at record stores such as Tower Records.
Vagu*Project’s current web page (not working well outside Japan and only in Japanese) can be seen here:
http://homepage2.nifty.com/vagu-project/
But in a few weeks the new more international web site will open in conjunction with their One Man Live and new album release June 10th !!
So that is something we really look forward to!!

For many bands however, creating their own web site and making their songs and merchandise available for sale online just isn’t helping much, as the audience who really wants to do so, have a very hard time finding their sites. A needle in the haystack on Facebook, iTunes, Amazon etc. and many many Japanese bands don’t even have a presence at such places.
“The Pink Spider Web” intends to be like a small town square in the times before internet, or even before TV and Radio. Where people, who have a mutual interest in, and passion for, Japanese Rock music can find their band, discover new bands, and find the web sites for such bands, such as Vagu*Project.

Now then….what have the Pink SpiderWeb been doing since last blog entry..?
Well here it goes… this is a start….April 26th PSW went to Shinjuku as planned to see TSP and I was not disappointed. (also See earlier blog entry for more info.)

As you all might have understood now from the above text entry, is that  this ‘blog’ is not intended as some editorial reviews for Live gigsbut my idea with it is more to introduce you all to bands and places in Japan that might catch your interest, so you can find out more about them {elsewhere].

I will try to post as many links as I can to Official Home Pages , sound cloud files, or Facebook/ twitter pages etc etc
To TSP I didn’t bring the camera as this was for pure pleasure for myself and when I shoot a gig, I can’t rally relax the same way as when I’m not behind the camera.
This was a fun night together with my friend Miguel from Mexico who lives here in Tokyo and is engaged to a Japanese girl.

After the gig we went to a bar in my neighborhood called Hard & Sweet BLACK to meet up with the band members from
Re:VIBE, and with
Reds☆ (vo. AURA and Gu. 湾岸の羊 Wangan Sheep)
and Taka (Dr. BLADE_tm)

BLADE are by the way here below on the blog… a few entries down… and there will be more on AURA and 湾岸の羊 Wangan Sheep in a few days.

a wonderful FUN FUN FUN party and connecting night.…
As I didn’t have my camera with me this night, photos below were taken with iPhones in Darkness… tough for any camera…
It is a totally BLACK awesome space kind of place ha ha ha, but you can probably tell beyond the image quality of the photos that YES it was FUN!
Just HOW FUN this was…. well… I did get in trouble the next day for VoRCHAOS Live gig at Kichijoji Crescendo, because I lost my glasses this night and was practically blind Saturday….(more about that later) 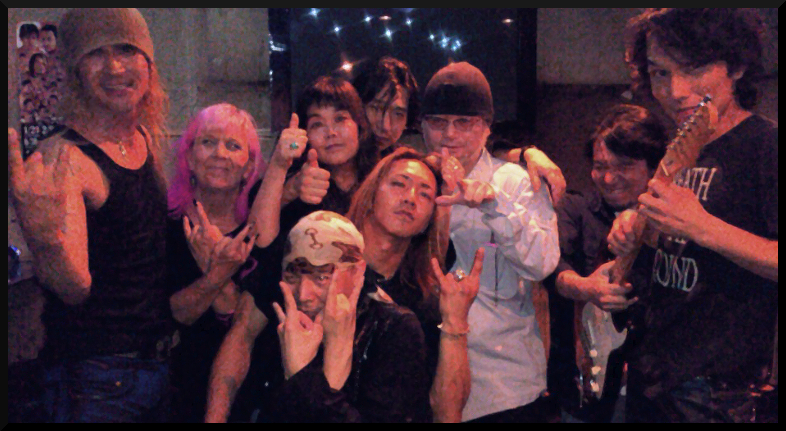 From left to right in photo:

and one more… same people….minus Junko and Saji 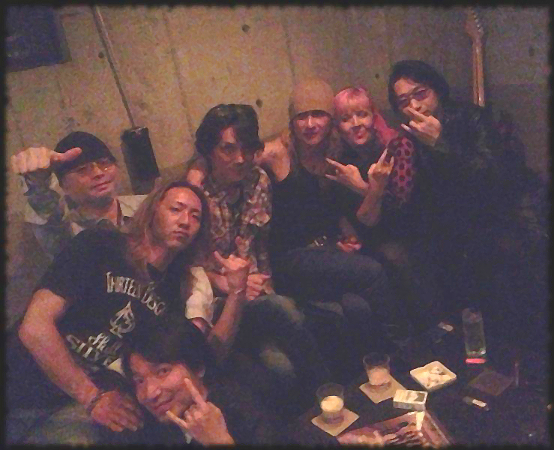