A glass of Beaujolais Nouveau 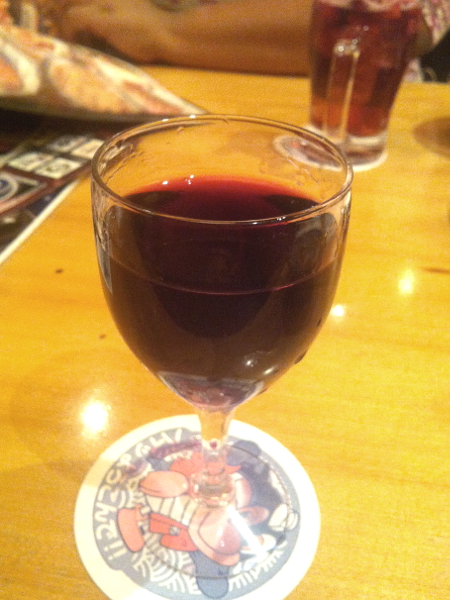 On the actual  ”Beaujolais Nouveau Day” 2011
The vin de primeur was sold at the izakaya located in
the building  where I live.

Seriously me labeling this as a “Japanese” thing to do,
is because I have lived in many places and not once seen such
heavy marketing for the Beaujolais Nouveau Day!
Well, when I hang a lot with friends in the wine industry during
the years I lived in San Francisco Bay Area, California, I was
utterly aware of it happening, but I guess I didn’t expect it to be
a BIG event here in Japan. Like everywhere….
Usually Japan sends vibes to me that it is:
Beer, Sake and Shōchū ( 焼酎 )
and some funky alco-sodas Strong Zero (link about it below)
that is their choice when imbibing alcohol. and yes, of course
common drinks like Gin Tonic,  Jack Coke, Bourbon Soda etc.
but so far when I’ve been out not all bars even serve wine.
I learn something new and remarkable about this culture every day!
Today is FRIDAY and I will go and explore a for me new neighborhood,
Shimo-Kitazawa, tonight.
I’ve been wanting to go there ever since I moved into my apartment
not far from Shimo-Kitazawa.  EXCITING!

For those of you puzzled at the “Izakaya” word
Here is a long list of different Japanese restaurant establishments
http://www.japan-guide.com/e/e2036.html

and a little bit about Shochu:
Shōchū (焼酎) is a Japanese distilled beverage less
than 45% alcohol by volume. It is typically distilled from
rice (kome), barley (mugi), sweet potatoes (satsuma-imo),
buckwheat (soba), or brown sugar (kokutō), though it is
sometimes produced from other ingredients such as chestnut,
sesame seeds, potatoes or even carrots.
Typically shōchū contains 25% alcohol by volume,
which is weaker than whisky or standard-strength vodka
but stronger than wine and sake.
It is not uncommon for multiple-distilled shōchū,
which is more likely to be used in mixed drinks,
to contain up to 35% alcohol by volume.